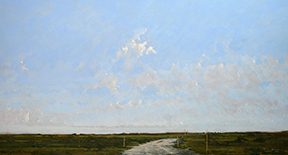 The Mystery of Painting

Walking into Ken Layman’s studio perched high on a bluff off of Cliff Road, with distant views of the harbor, a visitor feels slightly removed from Nantucket. The few narrow, rectangular windows in the studio are purposely placed near the top, close to the ceiling, so as to limit distractions from the outside world. In his own words, Layman paints from his “mind and memory. I don’t go outside and paint, and I don’t believe in using photos or still life.” The studio has a very high ceiling, ascending to a peak in the center creating an intimate and somewhat spiritual feel. 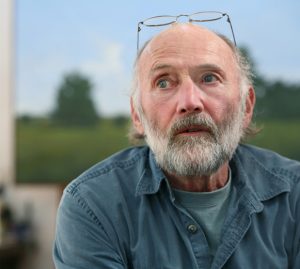 Having veered toward art since high school, Layman took note when he heard about the Rhode Island School of Design (RISD) in Providence, RI. He applied to the art school, had an interview, and took a drawing test. Two to three weeks later when he received the letter in the mail, he said, “I cried when I saw the ‘Congratulations,’  and that’s when life started for me.”  He had the realization that this was the world where he belonged. Layman graduated from RISD with a Bachelor of Fine Arts, having made the Dean’s List each year, and then continued on to graduate school at Tulane University where he got his Master of Fine Arts.

In the late ‘60s Layman moved to Nantucket, but spent the next decade or so commuting to Boston where he taught at Wheelock College, eventually becoming the chairman of the art department. After he left teaching, Layman moved to Nantucket permanently in the mid-eighties to focus on his own painting, and has been painting full time ever since.  “Paintings are about the painter. It is hard to hold onto that because you have to make a living.  I have trouble with the commercial side of painting,” he says.  Fortunately for Layman, he has found success both artistically and personally with the friends he has made on Nantucket—a place where he was able to trade paintings to help pay for the births of his two sons.

Layman’s studio is full of paintings of all sizes. They are mostly Nantucket landscapes and seascapes, and very few portray people. Even when people appear, there are not many.  Layman also paints large New York City street scenes, and this past year he did a series of landscapes with lone houses.  “Basically my paintings are self-portraits,” he says. “I believe there are pictures and there are paintings. Pictures are about the subject matter. They can be beautiful and even in museums, but paintings are always about the painter. As long as you’re painting for yourself, you’re growing.” Layman’s paintings are, to put it simply, quite beautiful.  His landscapes draw you in with big blue skies and varying degrees of cloud cover rising above richly detailed landscapes, sometimes featuring a sliver of ocean beyond.  Layman also paints non-representational paintings, but says, “They are hard to do because you don’t have anything to start with. You must slowly look for order, listening to the painting with your eyes and getting rid of what is not important to the painting.”

This summer the Artists Association of Nantucket (AAN) will honor Layman at the annual benefit gala on July 8, which will be held at the Great Harbor Yacht Club.  He has generously donated a beautiful and large landscape painting that will be auctioned off that evening. Layman is a life member of AAN, having joined in the late 1960’s. He still regularly shows his work at the Cecelia Joyce and Seward Johnson Gallery at 19 Washington Street. He has also taught at AAN for many years and still does to this day.

One of Layman’s famous quotes that appears on his website is, “Painting is a mystery to me. Not only do I not understand it, I’m not convinced I am supposed to.” He sees his talent as a gift, and says, “I’m just the one holding the brush.”  On behalf of all Nantucket art lovers, we are very thankful that he is. Submitted by and with permission of Artists Associaton of Nantucket.