“It has been our pleasure to work closely with Doerte Neudert for more than a decade as an art adviser. She is brilliant, creative, intuitive, and a true master of understanding how to match people with art and make their homes a true representation of their artistic spirits. We would highly recommend Doerte, a rare and special individual, to anyone seeking to discover a marvelous source of modern art and collecting insight.”  —Jack & Suzy Welch,  Authors, The Real Life MBA

Doerte Neudert, Owner of Art Cabinet Nantucket, has been recognized by elite American artists for dedication, achievement, and leadership in contemporary modern art.

A native of Germany, Ms. Neudert spent thirty years married to an art professor;  art and music were the main subjects of interest during that time.  In 1995 she permanently moved to the United States; opened a gallery displaying European and American modern art; and built a house, then a studio. She joined the European Salon in the summer months, and traveled for five years all over the world, including India, during the winters.

In 1995, she spent ten days in a European salon at the Center for the Arts. She also worked with psychologist and gallery owner Dr. Al Orensanz in New York City; did a solo show for artist Charlotte Culot in France, and another solo show for her at the French Library in Boston, Massachusetts. She also participated in international fairs.

Over her more than fifty-year career, Ms. Neudert has been able to inspire others. She has stated that her goal is to awaken an individual’s curiosity and spark his or her creativity. In addition to running her gallery on Nantucket, Ms. Neudert has spent over twenty years here offering a European-style salon centered on music, art, lectures, and art discussions.

Ms. Neudert’s art gallery brings a European elegance to Nantucket Island’s traditions. She features a wide range of artists in hopes of connecting people to her lifelong passion for the arts. Under her leadership, Art Cabinet Nantucket has been a six-time Best of Nantucket Award Winner from 2009-2014, and was honored with the Massachusetts Excellence Award in 2013. Most recently, she has been awarded a place as a Woman of Distinction in a WorldWide “who’s who” specifically for the arts, and received an honors award from WorldWide Branding for “Lifetime Achievement for Outstanding Professional Dedication and Career Longevity”.

Ms. Neudert attributes her success to her upbringing and her self-confidence. Even more important, she has learned that Americans respond favorably to spiritual and emotional values; they trust and respect her concept, and her offerings—The Spiritual In Art. By appointment only. 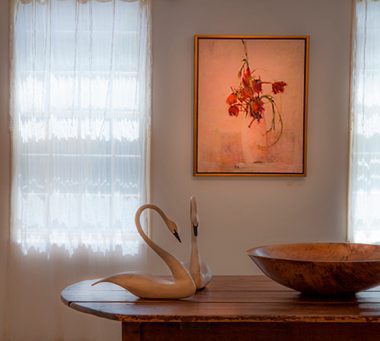 VIEW GALLERY
The Gallery at 4 India 4