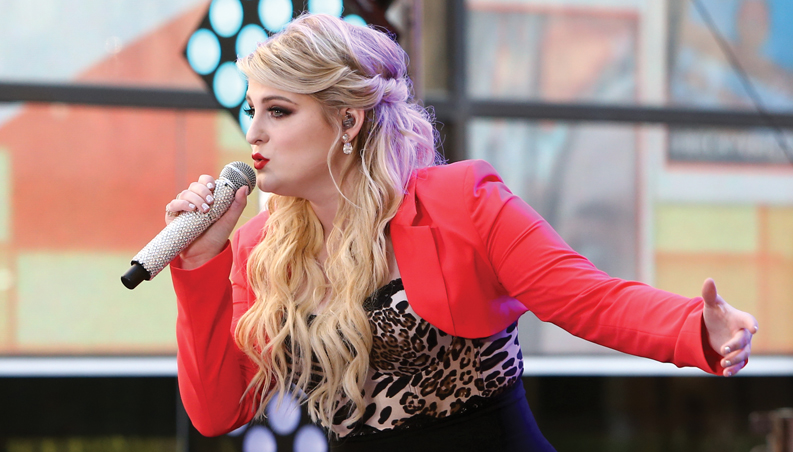 Meghan Trainor’s Dad: What’s it like to be the father of a twenty-two-year old superstar?

Gary Trainor wouldn’t be able to tell you: he’s too busy authentically relating to his daughter. On his bedside table are Instore and Billboard magazines – no novels. He keeps up with industry trends, and is sharp about social media and its impact on culture. He studies Snapchat so he can understand how teenage girls think and communicate, and looks at blogs to understand the visual poetry of the urban lifestyles of Meghan’s friends and contemporaries. He uses his knowledge to help Meghan stay grounded and focused on her incredible success. 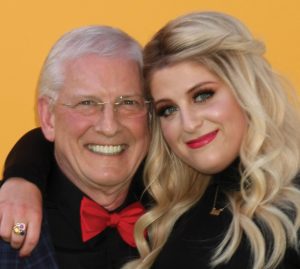 An English-Scottish clan with Polish, French, and Irish heritage to boot, the Trainors believe a traditional breakfast is the best way to start your day. Meghan’s favorite food is pizza. Sound wholesome? It is. Anyone who saw the 58th Annual Grammy Awards knows that Meghan and her father share a special bond that could only exist in a close-knit family. Father and daughter both openly wept with joy when Meghan won the Best New Artist award. It was a moment that resonated with millions of viewers as he whispered in her ear “you made it” just prior to her acceptance speech. It’s a moment most parents only dream of—the moment you see your child fully self-actualized, and celebrated by the entire world.

“To watch a young child develop a dream and dedicate their lives to the musical goals set before them is rare, to say the least,” Gary says, recalling how Meghan once displayed her goals on a vision board in Nashville. She wrote a pop song, “Who I Want to Be,” describing herself sitting at the Grammy Award ceremony with her family, and her dream came true at the age of twenty-two. “Who wouldn’t cry along with her?” asks Gary, who adds that “You made it,” was an inside joke, and that night was the final time he would ever say those words to his daughter.

The Trainors are all creative and entrepreneurial, and they play as a team. Gary and his wife Kelli have quickly adapted to the fast tempo of Meghan’s soaring career by engaging their family’s collective talents. Ryan, twenty-three, shoots video for Meghan’s social media strategists, while twenty-year old Justin, finishes up a degree in music production at the Los Angeles Film School. A trained musician himself, Gary knows that talent is just one aspect of a successful artist’s career.

At just seven years old, ‘The Muse’ found Gary in the form of a natural keyboard proficiency. By the time he was eleven, he was already earning his own income by playing piano for a local dance academy after school and on weekends when he wasn’t at church. He was having so much fun that he barely noticed he’d become proficient at sight-reading and also had developed a strong sense of rhythmic articulation. He took his skills into the classroom and became actively involved in his school’s music programs, achieving proficiency in voice and several more instruments.

Gary enjoyed summers on Nantucket as a child, and became a lifeguard on island in his teens. Later on, he stayed in the Midwest to earn bachelor’s and master’s degrees in music education before taking his music career on the road for seven years. (His first rock concert was Peter Gabriel.) He settled down on Nantucket in 1977 to teach in the public school system, and in 1987 he started his successful jewelry company, Jewel of the Isle.

Gary says he loves classical music— Beethoven in particular— but is also fond of James Brown and Motown for the same simple reason- music ‘moves’ him.

Meghan was born in 1993, and was clearly a musically gifted child. She was singing proficiently by the time she was  five years old, and was primarily self-taught at piano and guitar. She was able to add three-and four-part harmonies to her own original songs, and recorded her first full-length album at age fifteen. She was already winning song-writing competitions when she began working with her father on music theory and music technology, including Garage Band and Logic, while gleaning considerable knowledge of the music industry.

When asked about Meghan’s high-school experience on the Cape, Gary recalls how Meghan loved sign-language, math, English, and playing trumpet and percussion in the school jazz band. As both parent and teacher he observed that she was an ‘auditory and visual learner’ who gained confidence through music and the recognition she earned from her peers. Despite the associations audiences may have inferred with her big hit ‘All About That Bass’, Meghan and her family regard her as a normal-sized girl—neither big nor thin. Meghan “likes her snacks and junk foods”, but her father is clear about the fact that “Meghan did not write a song to talk about body image, nor to start a cultural conversation about body image.” Gary recalls how his daughter “was not ‘girly’ and was always comfortable with the guys. Hanging with the girls was always more stressful. She has learned to be a beautiful girl today.”

Fast-forward to Meghan’s current career status as a superstar. Her father remarks that “her life has changed a great deal. Stress is a predominating factor in her life, and we feel that stress along with her. We try to help her as best we can. Kelli and I believe we make a difference, as well as her two brothers, who are always there to help her as well. But it has been a learning curve of stress management for all of us.”

As a family, the Trainors sometimes ‘forget’ who Meghan is. She lives with her two brothers and is rarely alone. They go out together to the supermarket or a restaurant in “a casual manner…and Meghan walks amongst her fans mostly unrecognized.” But in New York, Los Angeles, and the United Kingdom, Meghan “has now reached a level of star status that requires her to have a bodyguard at all major performance events and appearances.” Her father notes that she “is always willing to stop and take the time to greet fans and friends anytime and anywhere.”

When asked if Meghan would ever consider performing for her legions of fans on Nantucket, Gary explains, “Meghan and her team have often thought about performing on Nantucket. The subject came up recently the other day, and there always seems to be problems with travel costs, scheduling, and a venue that is large enough to accommodate the volume of people that may attend.”

Reflecting again on the big night at the Grammy Awards, Gary Trainor says he enjoyed a champagne toast in Meghan’s dressing room after the ceremony telling her, “From this time on you will be introduced as Grammy award-winning artist, Meghan Trainor.” Then Dad, daughter, and brother Ryan took off for the Sony Party and Justin Bieber’s party before Meghan finally admitted she “would love to just go home and eat pizza” with family and friends at her house.

Gary Trainor has served on the NMC (Nantucket Music Center) Board of Directors, where he actively participated in a conversation about music technology and the use of social media strategies for musicians.

Dr. Greta Feeney is a musician, creativity scholar and teaching artist who currently serves as Executive Director of the Nantucket Music Center, an organization focused on community arts education, grounded in civic engagement, with educational and performance programs that activate individual and collective growth and development through the study and experience of music.