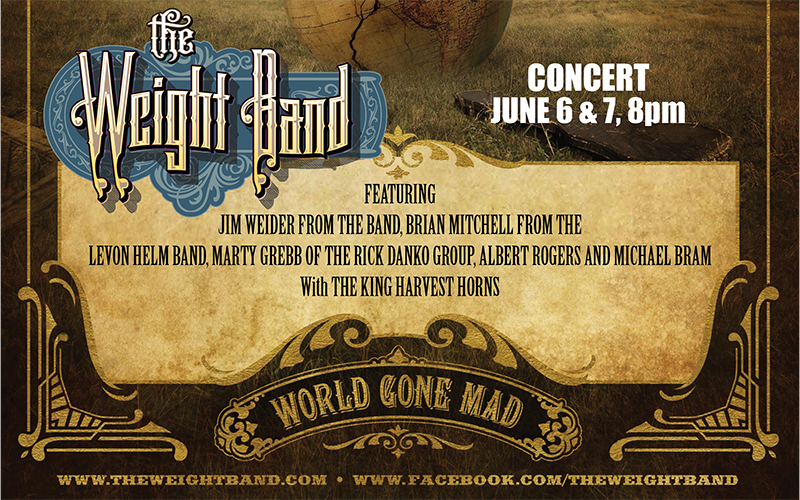 Prepare for an unforgettable performance and enjoy timeless hits like The Weight, Up On Cripple Creek, Ophelia, The Night They Drove Old Dixie Down, Rag Mama Rag and so many others.  Hear the most authentic presentation of The Band’s music performed on stage, and see why the Chicago Sun Times proclaimed “THE WEIGHT carries on where THE BAND left off.”

The Weight Band “World Gone Mad”  reflects the band’s growing concern over the divisiveness of today’s political climate and life’s hardship. It is a powerful glance at the current national mood. The song originated while Jim Weider was on tour in San Francisco. “I saw all these homeless people sleeping under bridges in these tent-like cities. It stayed with me, and really underscored the economic despair still lingering in our country,” says Weider. Inspired, Weider began to craft the song’s lyrics, such as: I see kings and queens sleeping on the street Got no home no shoes on their feet Don’t it make you want to hang your head & cry Some folks falling while other ones rise Later, joined by co-writer Colin Linden, Weider reacts to the 24-hour talking head news cycle. It’s a gripping image for an increasingly bewildering world: Lions and elephants running around Looks like the circus is back in town Screaming and hollering like chimpanzees Fighting one another on my TV …  The music video for “World Gone Mad” was filmed last summer by Conductor Productions during a celebration at the storied Levon Helm Studios in Woodstock, NY.

Coming to Nantucket, The Weight Band is on tour with their newest album Worlds Gone Mad this June 6th and 7th, at the Dreamland Theater.

The Weight Band Meet & Greet in the Harborview Room 6:30-8pm
Available both nights of the concerts, meet members of the band reception includes drinks and lite bites.  BUY TICKETS

Gaze at our Social Media Wall Feature for the Weight Band, updates ever two hours!